10 Comments
These flowers are fantastic. Tulips, daffodils, pansies - all great in their one way - but these are truly special and quite fragrant!

"First Magnolias Of The Season"

20 Comments
This magnificent flower is synonymous with the south and late spring. It typically blooms about time for the Kentucky Derby and is such a fresh addition to spring. Its velvety soft, creamy petals bruise quite easily, and the honey bees love them.

10 Comments
It's no mystery how this bottlebrush tree got its name - this unusually shaped flower looks just like a bottlebrush although the real ones typically aren't red. This great red color stands out against the beautifully clear blue sky.

8 Comments
Keeping with a theme of orange for spring, here is anothergreat looking (and somewhat unusual) plant that literally explodes with color. Interestingly, it's called the firecracker plant.

16 Comments
How iconic! Many areas have something that is identifiable with them - either a landmark, natural feature, skyline, or something that makes them easily recognizable for what they are. Spanish moss means the south - in this case Florida. They have from the oaks and other trees - and give the sou...

4 Comments
Today at Martinsville, Jimmie Johnson continued his winning ways at this racetrack - having won there last spring to notch owner Rick Hendrick's 200th win as a car owner.Coming into the race, Johnson won his third pole and set a new track record. He led flag-to-flag with only a few laps being out...

12 Comments
Grape stains are hard to get out of fabrics - like carpeting and clothes. While the purple color is pretty, it doesn't belong where it shouldn't be. Sometimes, you can find it where you aren't expecting it - and you like it. This beautiful flower looks like it has grape jelly in the center (lik...

12 Comments
Q: How do we know it's spring?A: There are so many indicators. Here are some that come to mind - in no particular order: Major League Baseball spring training Daytona 500 and start of NASCAR season College baseball season underway March Madness basketball Time change to Daylight Savings Time East...

Q+A: Why Do We Have Daylight Savings Time?

14 Comments
Q: Why do we (most of us anyway) have daylight savings time?A: I can think of several reasons - and probably none coincide with the legislative one.For me, DST (daylight savings time) is a reward for getting through the winter. Notice we don't have to wait until April like we used to.After those ...

6 Comments
I have been honored by the National Sales & Marketing Council of the National Home Builders Association with the "Bill Molster Award" that is given annually to the individual that has made a major contribution to the Council, its activities, and those of the industry.This is an award for years of...
Previous 1 2 3 4 5 6 7 8 9 10 … 14 15 Next
Back to Top Archives
Ambassador
2,543,441 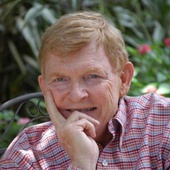