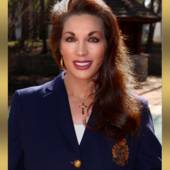 I specialize in Residential, Land/Farm, Commercial, and Developmental Real Estate.

Get to know DeLena Ciamacco

DeLena Ciamacco was born and raised in Columbus, Ohio. She attended Columbus Public Schools and then The Ohio State University for 6 years with studies in International Business, International Marketing, and Criminology/Sociology. In 1989, she decided to take a temporary detour from her original path of attending Law School at Capital University and decided to pursue her Real Estate career.

DeLena began to sell Real Estate with a local Conventional Brokerage and soon discovered that in order to grow she would need to affiliate herself with a much larger, International Company. She chose RE/MAX and her career as a Realtor began to soar. After just her 2nd year with RE/MAX(1993), DeLena ranked #5 in all of Ohio Association of Realtors, she was inducted into the RE/MAX International "Hall of Fame" (RE/MAX's highest achievement award at that time) as the youngest Realtor in RE/MAX History to attain this level of sales. She has been the recipient of RE/MAX's highest awards since her first full year with RE/MAX. She has been recognized in "Who's who in Residential Real Estate in North America for 1994, 1995, & 1996. Articles have been written about her in Ohio Realtor Magazine, In Contract Magazine, Columbus Executive Woman's magazine and Buon Giorno magazine to name just a few. She was also featured in numerous books which include "Billion Dollar Agent-Lessons Learned" and "Success Stories". She has contributed her time as a Speaker on numerous "Top Producer" panels. In 2002 DeLena was nominated for the Ernst & Young Entrepreneus of the Year. Her credentials and ranking in the Real Estate industry among all other RE/MAX Team leaders is as follows:

Re/Max International Broker-Owner of the Year 2002

Columbus Board of Realtors

The Ohio Division of Real Estate

The National Association of Realtors

DeLena Ciamacco is a well-known, respected Top Producing Realtor in Central Ohio. Her myriad of accomplishments, recognition, and professional credentials as they relate to Real Estate, make her a perfect individual to provide insight to the masses on all aspects of Real Estate sales. Her creativity and honest approach to marketing Real Estate has enabled her to succeed in her career. DeLena's philosophy is "An educated and well prepared Buyer or Seller is a smart Buyer or Seller". Her desire is to inform the public, by pulling from her 20+ years of Real Estate sales & Marketing, what is necessary to get to a successful closing in these challenging times.