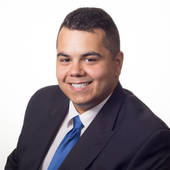 Get to know David Garcia

Formerly the Assistant Team Leader and proud member of the Keller Williams Realty Landmark's Executive Team. David Garcia is a native New Yorker who grew up in Queens among a close-knit family. David relocated to Buffalo, New York at the age of 17 to earn his Bachelor's Degree in Political Science at the University at Buffalo (UB). David considered a career in law, but kept his options open, he excelled as a Loss Mitigation Specialist at Bank of America in Getzville, NY. David's work ethic, outgoing personality and superior communication skills impressed his superiors who repeatedly encouraged him to apply for a management position in the Loss Mitigation Department. David had his sights set on returning to New York City. After careful consideration, David decided to come to New York and pursue a career that had been pulling at him for several years. An opportunity presented itself in 2011 that would help him to finally get into the Real Estate industry. He joined Keller Williams Realty Landmark as a Part-Time Assistant in the finance department. After only four months, he was able to work his way up to the Assistant Team Leader Role where he continued to expand his Real Estate knowledge through consulting agents, enforcing anti-discrimination compliance, training agents on technological systems and facilitating various classes for the agents. His time as Assistant Team Leader proved to be invaluable in his development in the Real Estate Industry. He seized every opportunity to learn about the business that he wanted as a career. Keller Williams Realty provided David with a unique ability to not only learn from all of the classes that they offer but to also learn from some of the very best agents in Queens. This was a reflection of one of the core beliefs that David and Keller Williams share, and that is that “Together, everyone achieves more.” His primary focus is to coordinate all parties involved in a transaction, provide exceptional customer service and to create lasting relationships. David attributes his Grandfather as the most influential person in his life. A man who's life exemplified hard work, dedication, enthusiasm and love for his family motivates David to strive to be the best agent that he can be, but more importantly the best man that he can be.

Business Objective: A Life by Design