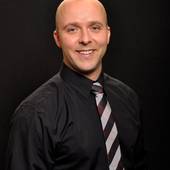 I have a growing real estate team.

Get to know Joey Torkildson

Born and raised in the Twin Cities, Joey graduated from Irondale High School in 1999 and immediately went to college to start working on his generals. At the age of 20, he decided to join the Army Reserves and become a bridge engineer. For the next five years, he continued going to school and changed course a few times when he was deployed to Iraq in 2003 in support of Operation Iraqi Freedom.

After he returned home, he worked with his father at his local home remodeling company. In 2007, Joey branched off and started his own business and was then deployed two years later back to Iraq. Upon his return he finished school and received his four-year degree in business and started his real estate business in 2010 at Edina Realty. Joey was in the top 9% of all Edina Realty Realtors which he accomplished in under four years. In 2014, he joined forces with Keller Williams and has never looked back! His team is always ranked in the top 10% of the market. They also joined forces with the Hergenrother Realty Group in 2016 and together they are part of the top 30 teams in the United Stated regarding amount of transactions. He has a beautiful wife Kendel and two sons, Mason and Lennon. They currently live in Shoreview, MN

Joey believes in the people part of this business! His team takes a candid, fun, and professional approach to the experience. His team is always looking for new ways to not only predict market trends but also help set the trends themselves. They won't waste your time, and they will make sure that expectations are met! Keeping current with the real estate market is extremely important; the team’s goal is to stay abreast of the data that matters to buyers and sellers so they can uphold the professionalism and expertise real estate demands. The team consists of numerous sales agents, as well as a full time staff, to handle the nuts and bolts of the day to day operations. You won't be left in the dark at anytime and someone will always be there to help! Joey and his team will get the job done for buyers and sellers of real estate in the Twin Cities!