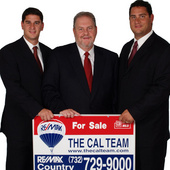 Get to know John Calandruccio

John J. Calandruccio was born and raised in North Brunswick, New Jersey.  He married Jill Colligan in November of 2001 and they have two beautifaul twin girls, Julia and Gianna and a two year old Jack.  John was a graduate of North Brunswick Township High School where he played both Football and Baseball.  He graduated from Rider University in 1999 with a Bachelors Degree in Business Administration.   John is proud to announce that he is now in the family business of Real Estate along with his father John Sr. and brother Frank.