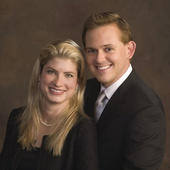 Get to know Tim and Julie Harris

Tim and Julie Harris have been leaders in the real estate industry since day one of their careers. Having sold more than 100 homes their very first full year as REALTORS® (and every year there after). In 1997 they gained industry wide acclaim when they were honored by the National Association REALTORS®. Tim and Julie were the youngest agents to earn the RE/MAX Platinum award, Hall of Fame award. Many other state and national awards followed. As REALTORS®, Tim and Julie have participated in thousands of home sales. The Harrises went on to author several books including: ’0-10 Million In ONE Year, A Step by Step Guide’, ‘Should I Short Sale My Home?’, ‘Think and Grow RIch, Real Estate Edition’.

Due to their industry wide fame and success selling homes Tim & Julie became Howard Brinton Stars. 1998 saw the launch of their coaching and training business (then called Harris Success System). in 2002 they became coaches for the Mike Ferry Organization, eventually were named VPs of ‘The Real Estate Top Producers’. In 2007 Tim and Julie knew the real estate crash was going to be a turning point for the real estate industry. They saw the urgent need for agents to learn how to survive and thrive using the techniques they had used in their successful real estate career. Harris Real Estate University is proud to have many of the nations top producing agents as coaching clients.

Tim & Julie come from a long line of educators. Ivy League Tufts University was founded by one of Tim’s great uncles, Charles Tufts. Julies parents were both career educators. Her Grandfather, Dr. Norman Guitry, was founder of the Ohio Department of Mental Health. Another namesake from Julie’s family is famous 1930′s French actor, director Sacha Guitry. Tim and Julie both attended Otterbein College and The Ohio State University.

bookmark_borderbookmark
ActiveRain Community – over 4 years ago

What Can You Learn From Tim and Julie Harris®?

We've built the largest online real estate coaching & training organization in the world, accessible by any agent, at any point in their career. Join the tens of thousands of real estate professionals from nearly all 50 states and 7 countries as a student today. Be sure to visit our website at timandjulieharris.com to learn more about our coaching programs.

Testimonials for Tim and Julie Harris