Historical Architecture question: What is a “Bastion"?

Historical Architecture question: What is a “Bulwark"?

"Barricade of beams and soil used in 15th- and 16th-century fortifications designed to mount artillery."

You know,  I decide to censor my answer on this one.

Do you mean the people kind, or the building kind?

A strong part of a fortress.

Could it be the kid next door who thinks we are his parents?

I have one to fend off endless realtors who ignored our 3 -"NO solicitations, no realtor or misssionaries" signs.  There is a city code $300 fine w/o a city solicitation permit.

Not sure about a projection on this one!

Architecturally, I needed to do a search which led me to find this quote:

The Internet is a bastion of negativity, and we get to sit there and voice our cute, little, important opinions   ---    Roger Craig Smith

Of course, this has nothing to do with your question but it proves, once again, that the Internet leads me in all sorts of directions.

Bastion is the illegitimate son of Bulwark. 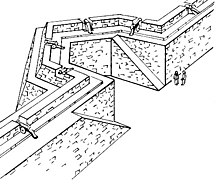 Drawing of a bastion

A bastion is a structure projecting outward from the curtain wall of a fortification, most commonly angular in shape and positioned at the corners. The fully developed bastion consists of two faces and two flanks with fire from the flanks being able to protect the curtain wall and also the adjacent bastions.[1] It is one element in the style of fortification dominant from the mid 16th to mid 19th centuries. Bastion fortifications offered a greater degree of passive resistance and more scope for ranged defense in the age of gunpowder artillery compared with the medieval fortifications they replaced.

A stance the political parties take against each other!

another one I did not know....hmmm

It is an agent that thinks they "know it all"!!!

That's the son of the bastard that made me work today.

The offspring of two other "B" words.

It's the last thing of defense.

I have heard that term used in describing areas of a fort.

I'm late to the party but, do know this one and was going to make a joke about the people! Others have beaten me to both!

Now I know, thank you for all answers.

Yes, your question was interesting, now I know the answer.

Bastion is an action role-playing video game developed by independent developer Supergiant Games and published by Warner Bros. Interactive Entertainment. In the game, the player controls "the Kid" as he moves through floating, fantasy-themed environments and fights enemies of various types. It features a dynamic voiceover from a narrator, and is presented as a two-dimensional game with an isometric camera and a hand-painted, colorful art style. Bastion's story follows the Kid as he collects special shards of rock to power a structure, the Bastion, in the wake of an apocalyptic Calamity.