Historical Architecture question: What is “Poteaux-en-terre"?

Historical Architecture question: What is an “Ogee Arch"?

"In architecture, the principal use of the term is to describe an arch composed of two ogees, mirrored left-to-right and meeting at an apex. Ogee arches were a feature of English Gothic architecture in the later thirteenth century."

Many a pole building has been built by my crew.

Put a little Ketchup in it and I bet it taste good.

A port-a-potty on the earth.

A sumptuous pot roast with wine?

A French war cry... immediately followed by "We're so sorry, we surrender" 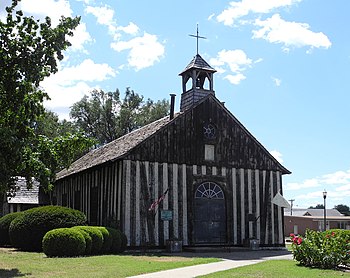 Holy Family Church in Cahokia, Illinois was built of walnuttimbers in the poteaux-sur-sol style in 1799 replacing a similar structure built in 1699.

Poteaux-sur-sol (“posts on a sill” Sol is also spelled sole and solle) is a style of timber framing, in which relatively closely spaced posts rest on a timber sill. Poteaux-en-terre and pieux-en-terre are similar, but the closely spaced posts extend into the ground rather than resting on a sill on a foundation, and therefore are a type of post in ground construction. Poteaux-sur-sol is similar to the framing style known in the United Kingdom as close studding. Poteaux-sur-sol has also, confusingly, been used for other types of timber framing which have a sill timber such as post-and-plank, but this is considered incorrect by some scholars.[1]

Poteaux-sur-sol is a part of American historic carpentry but is known by its French name in North America as it was used by French and French-Canadian people in the region historically known as New France. Besides its appearance in French colonial architecture it was also used in the 19th century by Ukrainian peasants living on the open steppes or anywhere there was a timber shortage.

This one is well beyond my paygrade!

I can't even pronounce that one, much less offer a guess as to what it is!

A Who.  I need to be able to pronounce them first

That sounds like a little bit of dirty talk going on. I think I will stay clear of trying to interpret.

I defer to Roy Kelley

My first thought is that is has something to do with Beatrix Potter. :)

I missed yesterday's question, but must say that I love the name Ogee Arch!

Something French made with liver!

Could also be the dock where the stays!

Oops, my first thought was first floor bathroom... but I googled it and now I know better!

Definitely not the same kind of pole that pole-dancers use.

I haven't a clue!