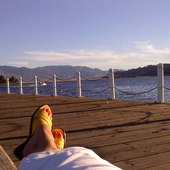 By Living Spaces, Interiors, Local Support, Global Concerns
Mentioned in the previous post on Shelburne's 225 Year Celebration of the Loyalist Landing I wanted to expand on this most deserving feature.  Such a delight it was rolling into Shelburne and sighting first thing the place I would stay for the night. When I am on my driving trips I never know where I will end up for the day, and don't usually book ahead. I sometimes have gotten into trouble doing that - but not this time.   Shelburne and its beautiful harbour, was one of those perfect pictures that thrills the soul, in the warm sun of late afternoon, the Friday of the July /08 weekend celebration of 225 years since the Loyalists landed here. The Hostess and Owner, Pat Dewar of the Cooper's Inn was peering out through the red screened front door of her B&B establishment apparently enjoyi... 10/26/2008
Comments 3

By Living Spaces, Interiors, Local Support, Global Concerns
July 17 - 20, 2008, Historic Shelburne was the site of a Grand Reenactment of the Loyalist Landing which occurred in Port Roseway (now Shelburne) in 1783 - 225 years ago.. ...and I was there!!! The warm sun of late afternoon danced on Shelburne Harbour as, in awe I arrived amid the setting of historical buildings. (Below - my view at dinner)  I drove straight into Historical Shelburne, stopping at the corner of Dock Street and Mason's Lane, right in front a B&B that, was coincidentally 225 years old. 'Cooper's Inn' was originally the home of George Gracie, a founding Loyalist in Shelburne. Even though it was beyond my budget, I of course had to stay!!  Gracie, 'a man of note', elected and sat on the Nova Scotia House of Assembly, drowned 1807 making passage from Shelburne to Halifax for... 10/21/2008
Comments 7
Explore Shelburne County, NS
View all cities
Shelburne County, NS Real Estate Professionals