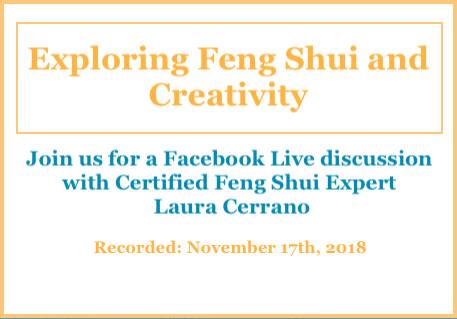 What to Know About Graveyards, Cemeteries and Feng Shui - Part 2

By Laura Cerrano, Certified Feng Shui Expert, Speaker & Researcher
(Feng Shui Manhattan Long Island)
Comments 1
This post has been inspired by fellow ActiveRainer, Candice A. Donofrio. She asked, “would the graveyard be considered destructive Earth, or its that too simplistic? Is Earth even the element destroyed?”  Lets take a closer look at Earth element and please keep in mind, each Feng Shui Consultant_Expert_Master may respond a bit differently. Earth element from a Feng Shui perspective is known for nourishing the body and nurturing the spirit and soul. Another aspect of this element includes recycling ‘old’ energy of the past and preparing it for new beginnings. In terms of the graveyard discussion, you could say this is pretty much what is happening on a physical and metaphysical level. To help elaborate a bit more, I conducted some scientific research to help offer insight into, “would th... 11/15/2018

By inboundREM Market Updates
(InboundREM)
Comments 1
Brooklyn Point Brooklyn, NYC Town Information, and Market ReportReal Estate in Brooklyn Point Brooklyn, NYCBrooklyn Point is a luxury residential condominium at 138 Willoughby Street Brooklyn, New York City. The complex is a beautiful skyscraper with 68-floors and 458 apartment units. The layouts of the condo include studio units, one to five bedroom residential units and the penthouse suites. The units are perfect for individuals or families who are looking for a new home in the heart of Brooklyn. The building and its apartments are wonderfully designed, and while it's unique, you'll appreciate it from the moment you see the structure, once you walk into the lobby, up to the moment you walk into your unit. Each apartment unit comes with custom furnishings and is built to maximize space... 10/31/2018 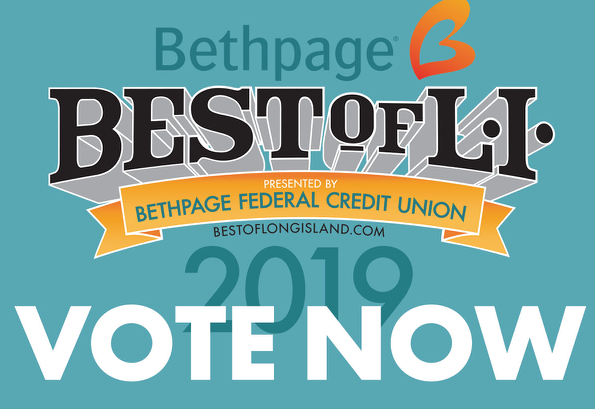 By Laura Cerrano, Certified Feng Shui Expert, Speaker & Researcher
(Feng Shui Manhattan Long Island)
Comments 2
FENG SHUI LONG ISLAND has been nominated for the Bethpage Best of LI 2019 Contest in the Interior Designer Category. Voting starts October 1 and runs through December 15, 2017. During this time, votes are accepted one vote per category, per day, per person by clicking on: Best Of Long Island Home and Garden Category Important! Before you can vote you need to register. This process only takes a moment. After that, you can vote for "Feng Shui Long Island, Inc"!  Below is a step by step after you register if the page bounces you away from the direct link:1. Click back on:  Best of Long Island Home and Garden Category 2. Scroll down and click on: "Interior Designer"  3. Click on "Feng Shui Long Island, Inc." All done! Each votes counts and helps!Thank you in advance! 10/12/2018

Before There was Biophilic Design, There was Leonardo Da Vinci

By Laura Cerrano, Certified Feng Shui Expert, Speaker & Researcher
(Feng Shui Manhattan Long Island)
Comments 6
So, who is Leonardo Da Vinci? He is probably one of the most influential people of all time, leaving his footprint during the High Renaissance era. His major accomplishments included advances within the fine arts, architecture, the engineering of flying machines, military equipment, science, anatomy, botany, geology, and physics, as to name a few categories. For this particular article, let’s examine Leonardo’s inspiration behind the, “Ideal City.” Between 1484 and 1485, 50,000 people died in Milan of plague, killing off nearly a third of the city’s population. Due to this, Leonardo developed a keen interest in urban renewal and a desire to liberate people from the old fashioned, over-crowded medieval city where people were crammed together “like a herd of goats”. Leonardo proposed new ... 10/10/2018 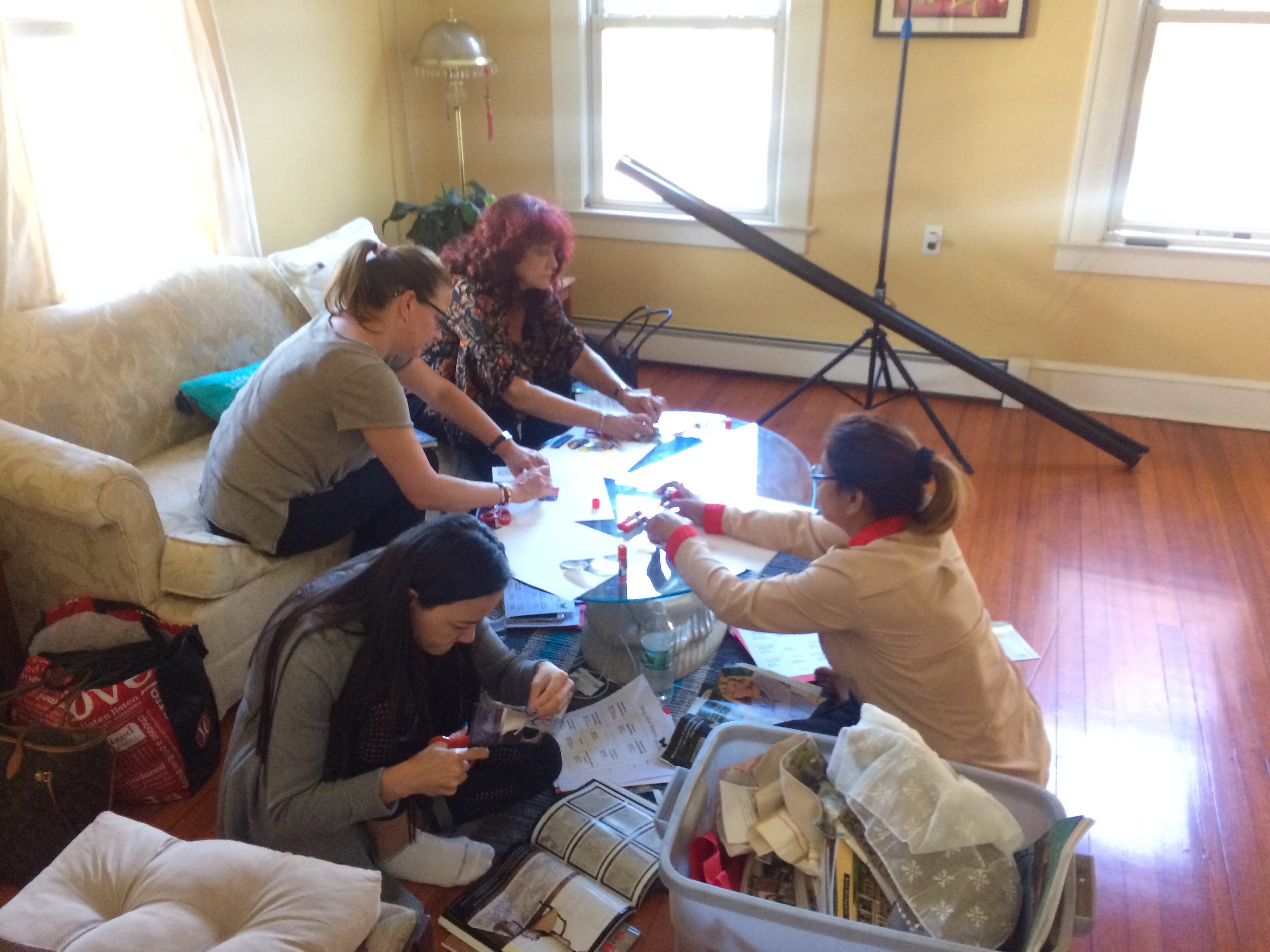 By Laura Cerrano, Certified Feng Shui Expert, Speaker & Researcher
(Feng Shui Manhattan Long Island)
Comments 6
Very grateful for the Feng Shui Introduction Weekend Class that just took place. Thank you to the students who participated. The two days really allowed us as a group to explore deeper aspects of this healing modality, with heavy focus on how to cultivate chi (energy) through discussion and energy movement exercises. We dug deeper into the ba-gua map, understanding the various life sections and five elements. We learned through storytelling, sound healing meditation, and completed the weekend class with vision board creations to help refine personal intentions and pull the teachings of the weekend together. 09/30/2018

By inboundREM Market Updates
(InboundREM)
Comments 0
75 Wall Street Manhattan, NYC Town Information, and Market ReportReal Estate in 75 Wall Street Manhattan, NYC75 Wall Street is a residential building in the financial district of New York City. The building is on the corner of Pearl Street and Water Street. Once built as an office building, 75 Wall Street was converted into a luxury condominium that has excellent amenities and amazing residential units. This luxury condominium has 36 floors and consists of 350 apartments and 250 hotel rooms. It has a modernist architectural style featuring high ceiling rooms with custom materials used in their interiors. Large floor to ceiling windows feature the stunning views of Downtown Manhattan and the East River. If you are in the market for a new home for yourself or your family, 75 Wall Street h... 09/27/2018

By inboundREM Market Updates
(InboundREM)
Comments 0
Be @ 90 William Manhattan, NYC Town Information, and Market ReportReal Estate in Be@William Manhattan, NYCBe@William at 90 William Street is a 15 storey office building which has been converted into a prominent residential condominium. It is located on the southeast corner of Platt Street and situated across the landscaped plaza in NYC's Financial District. The full-service prominent building features spacious loft-like apartments, a rooftop, indoor and outdoor Sky Lounge, and other features and facilities.Living in Be@William Condominium gives you easy access to the Financial District of the city. The neighborhood is the home of Wall Street and the New York Stock Exchange. The area also offers several commercial establishments, cultural and historic sites, and iconic skyscrapers. Shopp... 09/27/2018 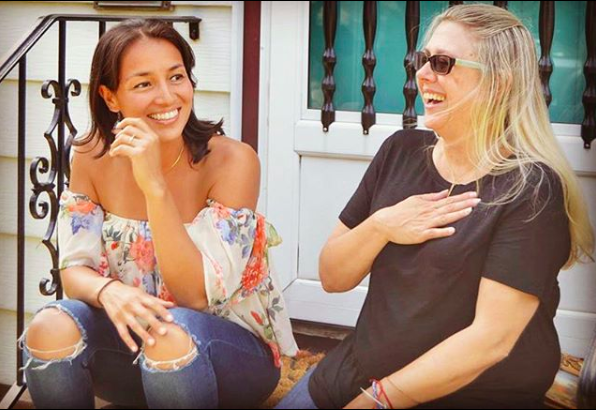 By Laura Cerrano, Certified Feng Shui Expert, Speaker & Researcher
(Feng Shui Manhattan Long Island)
Comments 17
The Kate Fox Show sat down with Certified New York Feng Shui Consultant Laura Cerrano on her front stoop to discuss “Cultivating Healthy Relationships (Romance and Friendships) with Feng Shui.” Insights on how to manifest authentic relationships, the importance of ‘dating yourself,’ how to prepare your home and self for love, success stories and more, are all shared during this interview. I hope the information shared could be a reminder to help you along your journey of love or perhaps provide new tidbits of information for self awareness and development when it comes to this topic.  09/17/2018

How To Feng Shui Your College Dorm Room

By Laura Cerrano, Certified Feng Shui Expert, Speaker & Researcher
(Feng Shui Manhattan Long Island)
Comments 6
Can you believe it?! Summer is pretty much over. And that means,….BACK TO SCHOOL! Do we have any college students reading this post? If so, and you happen to be living on campus, I invite you to take a look at several Feng Shui Tips on how to enhance the energy of your dorm room for the upcoming college year.  1. I remember the first year I lived on campus, I shared a dorm room with 3 other people, which was not ideal. Yet, one of the key habits that kept the peace between all of us, was being aware and mindful of each others personal space, which in tern provided visual and energetic boundaries. Meaning, we kept our own clutter under control as often as possible.   3. Plants are a great addition to any space and have been scientifically proven to help reduce stress and clean the air. E... 08/20/2018 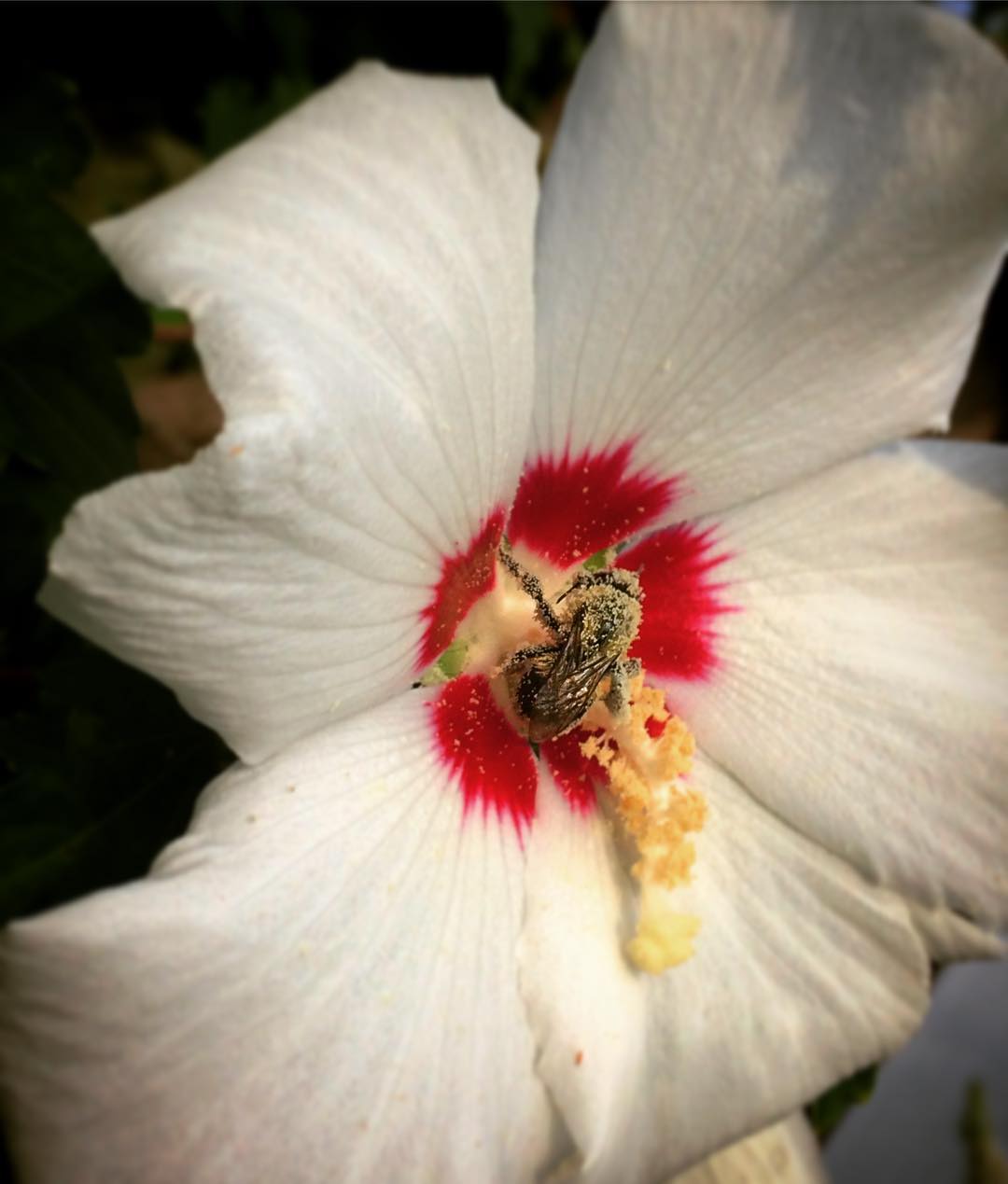 By Laura Cerrano, Certified Feng Shui Expert, Speaker & Researcher
(Feng Shui Manhattan Long Island)
Comments 5
Walking in my backyard yesterday morning, I stopped near an abundance of blooming flowers to witness a bustling world of bees, busy collecting pollen. This little guy was so maxed out with the amount of pollen on his body, taking off to fly seemed pretty challenging. Heres a quick fun fact: Bees could bring in up to a 100 pounds of pollen back to their colony in a single season! 08/19/2018

Feng Shui Evaluation Before Moving Into a New Home Or Office

By Laura Cerrano, Certified Feng Shui Expert, Speaker & Researcher
(Feng Shui Manhattan Long Island)
Comments 2
This Feng Shui service provided by Laura Cerrano of Feng Shui Manhattan is specifically designed for anyone looking to rent, buy, or move into a new home or office space. It provides you with the knowledge and insights on how to assess a space that has "Good" Feng Shui, along with receiving remedies, and additional insights as needed. Long Distance or On-site Real Estate Feng Shui evaluations are available. To learn more, please click on the link below.To learn more, please visit: Feng Shui Real Estate Evaluation Before Moving Into a New Home or Office 08/19/2018 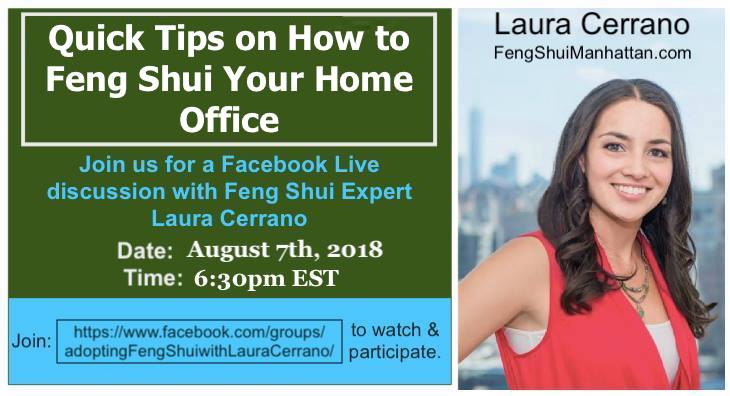 Facebook Webinar 8/7/18: Quick tips on How to Feng Shui Your Home Office 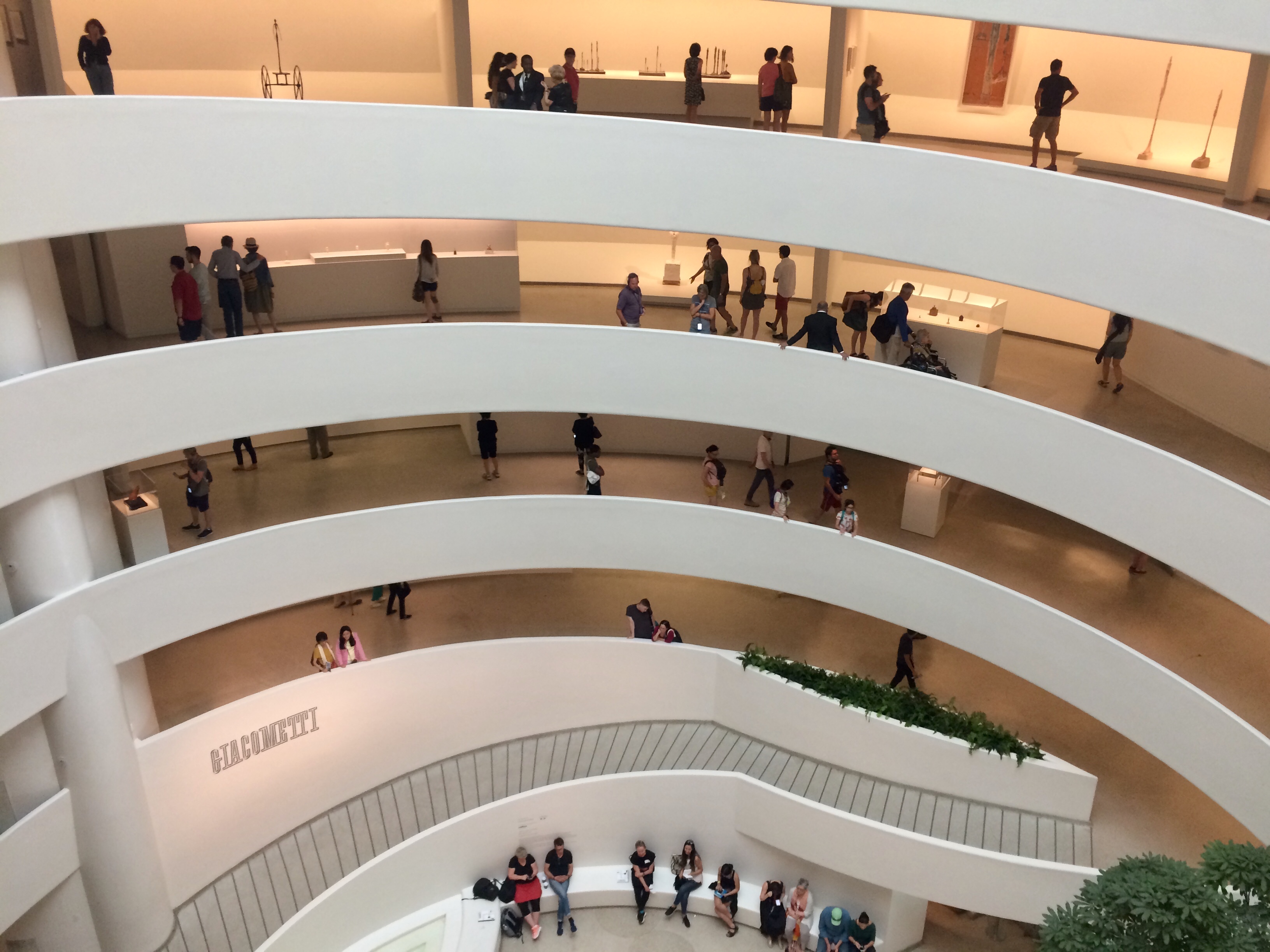 Exploring Giacometti at The Guggenheim with NYC Feng Shui Consultant

By Laura Cerrano, Certified Feng Shui Expert, Speaker & Researcher
(Feng Shui Manhattan Long Island)
Comments 9
This past Friday, I had the pleasure of visiting the Guggenheim in New York City with my former high school art teacher from 16 years ago. The exhibit was great and the company, wonderful! For those who live in the state of New York, remember you can reserve a museum pass from your local library, which provides you with FREE access into this museum.  Who is Giacometti?Alberto Giacometti (1901-1966) investigated the human figure for more than forty years. This exhibit examines the artist's practice and his unmistakable aesthetic vocabulary. Not only, will you be able to view his hundreds of sculptures, you could also see a documentary video capturing him in process with creating his sculptures (which is fascinating in it self) and view his drawings and sketch's, which again, are just as ... 07/19/2018 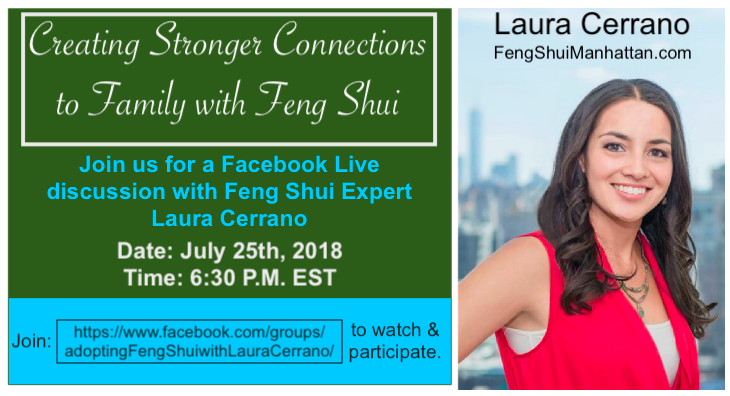 By Laura Cerrano, Certified Feng Shui Expert, Speaker & Researcher
(Feng Shui Manhattan Long Island)
Comments 2
FACEBOOK LIVE ANNOUNCEMENT:Certified New York Feng Shui Consultant Laura Cerrano is conducting a mini Facebook live chat.Date: July 25th, 2018 Time: 6:30pm - 7:30pm (est)Topic: Creating a Stronger Connection to Family with Feng ShuiLocation: If you missed the live taping, you can watch recording of Creating Stronger Connections to Family with Feng Shui.  Description:This Gua (life section) on the Ba-gua map plays an important role to self development and is very much worth exploring. With the journey that has been presented to me from birth, this life section really speaks to my heart. Being adopted from Colombia, growing up in a family who truly loves and supports me, and experiencing heavy loss on my mother's side of the family during my adolescent years, up-to young adult hood, has r... 07/19/2018