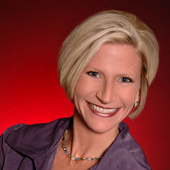 Get to know Becky OnullNeill

The "POWER" in Becky's team name stands for "Positive Outcome With Exceptional Results." "POWER" reflects her personal beliefs and states what you can expect when working with her team.  As her customer testimonials show, Becky works aggressively for clients, so it's no wonder that results are exceptional!  Becky O'Neill‘s "POWER" Home Selling Team serves St. Louis, Fenton, Chesterfield, Manchester, Wildwood, Ballwin, St. Charles, St. Peters, & O'Fallon in the Missouri Counties of St. Louis & St. Charles

A native of St. Louis, Becky O'Neill started a real estate career on the fast track here before relocating to Chicago in 2003 and starting her team there in 2005.  Now, five years and numerous awards later, Becky O'Neill is back in St. Louis and ready to go!

Becky got off to a fast start in the business.  After earning her real estate license in 2001, she sold 31 homes within her first 15 months with Re/Max Team in St. Louis, MO and achieved Executive Club Level before hitting the Windy City two years later.

Between the time she opened her doors in Chicago in 2005 to 2008, she sold 178 homes and earned awards every year:

In November, 2009, Becky came back to St. Louis, where she has relaunched her business.  Serving mainly St. Louis and St. Charles Counties, she focuses on St. Louis, Fenton, Chesterfield, Manchester, Wildwood, and Ballwin, as well as St. Charles, St. Peters, and O'Fallon.  Her niche is executive homes, especially for the relocation market.

Home Selling – over 9 years ago

Sell Your St. Louis Home if You Price It Right

Home Buying – over 9 years ago

Single Women of St. Louis: There's a Home for You Here

Hang your Hat in O'Fallon or St. Peters

How has Becky been able to achieve so much so quickly?  Becky is passionate about her clients!  Her respect for them and dedication to them is why most of her business is referrals.  She is quick to share the credit for her success with her wonderful clientele and her awesome team at the Becky O'Neill "POWER" Home Selling Team.

How does Becky stay in focus with today's ever changing Real Estate Market?   Becky is constantly searching for the latest technology to better serve her sellers and buyers.  Whether it's for lead generation and management, property searches, or marketing, Becky implements whatever will do the job to reach and serve clients.

How does Becky reach out to clients?  As Becky says:

We are the best full-time real estate marketing company offering excellent communication and professional customer service. You are just a phone call or email away from your question or concern.  We want you to feel comfortable and relaxed that you picked the right agent and company to represent you.  We want you to feel like you are our ONLY client.

Being a local resident and keeping up property values is a high priority of the Becky O'Neill "POWER" Home Selling Team.

Finally you should choose us because......You are our number 1 priority!

Looking to buy or sell in the St. Louis area?  Check out Becky's website or give her a call at 636-326-2290 to welcome her back to St. Louis and give us the opportunity to earn your lifetime referral.