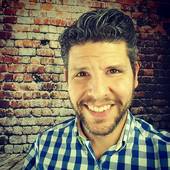 I offer 4 levels of flat fee real estate services throughout the state of Florida for those who want to save money by doing some of the work themselves.

Get to know Aaron Hoffman

My name is Aaron Hoffman based out of Jacksonville, Florida. I’ve been a real estate practitioner for the past five years and I love it. Every experience is different and in doing it, time and time again, I know that I’m helping people “move on” to the next phase in their lives.

The idea of selling houses was one I at first met with hesitation, to be quite honest. I had just left a position as a regional sales rep for an industry that had taken a sharp downturn since 9/11. I found myself looking for a career that I would enjoy doing, but not be stuck in an office for 8 hours a day, and the thought of traveling as much as had been just didn’t sound as appealing as it once did. I was living in Ohio at the time, and thinking very strongly of picking up and moving for a different city change of pace. I ended up in Jacksonville after a couple of my siblings who were living here convinced me that this was a growing place that had a lot of opportunity. So here I am.

I decided that selling real estate was a career that fit perfect for me. I could use the skills I already had in selling, combined with the satisfaction knowing that I would never be doing the same thing twice. And of course the rewards in knowing that I could be helping so many people realize their dreams. It all was very satisfying.

I got off the ground running. When I first got started, I worked for Assist2Sell Middlekauff Realty in Orange Park. It was a perfect place to start. Most of my business came from the advertising the office did to make people call in to learn more about the service. It was perfect for me because at the time, the market was extremely hot and the homes didn’t stay on the market for very long before they sold. Selling real estate is all about building relationships and because I didn’t know anyone, this gave me the ability to have people seek us out, not the other way around. There was always a steady stream of both buyers and sellers to keep us busy. I was a quick study and learned quick because of the volume of homes we were selling. I remember at the end of the year looking at my stats and realized I had sold 90 homes in my first full year. That’s a huge number! It has, of course, given me the confidence in tackling any real estate transaction because I had seen so many different scenarios played out. I must say I really loved working there because of the people I worked with, the streamlining of the office management, and the steady stream of business it provided. All until the market started slowing down…

When I first got into real estate, the agents that had been around the block had told me that it would be great in a fast market, but it’s hard to survive in a slow market. For those that don’t know how Assist2Sell’s model works, here is the short version. Sellers, instead of paying a standard 6.5% commission to sell their house, A2S would charge a seller $2995 to sell their home if they could find a buyer, but tack on an additional 3% if the agent who sold their home came from a different agency. Either way, the seller would still save hundreds or even thousands of dollars vs. selling through a “traditional agency”. Because of the volume A2S did, it provided a great income for me when I was just getting started. That being said, I thought that in a slower market like the one we are seeing now, people would want to protect their equity and search out a discount agency like A2S. It’s true, they did. Lots of them. What I didn’t fully realize was how many buyers would seem to disappear. Even though we had twice as many listings as we had when we were at our peak, the buyers were hesitant to buy due to the changing market conditions. In real estate, you don’t get paid until you SELL a house, not when you list one. When I would finally sell a house, the split of commission with the broker was such that I couldn’t afford to stay on anymore. In fact, neither could most of the agents that I had spent the last few years with. In a short time, we went from having around 18 agents and three offices, to three agents and one office. The same is true with the other A2S offices around Jacksonville. I had to find another company to work for. Sadly, those agents that had warned me back when I first started were right about the business model. Still, I don’t regret the years I spent learning and making great relationships while I was there.

The good news about having something like that happen, if any, is you get to start fresh and interview many different companies and business models that were out there. I was looking at the future of real estate and and I knew that technology was a key component to success and I’d want to find a company that was already looking ahead, but still providing a great value. I knew I found my match with ADDvantage Real Estate Network.

ADDvantage Real Estate Network offers everything a seller could possibly want when choosing a company. The word is spreading across town, and it my job to help as many people as I can realize their goals in real estate. As always, call or write me to find out more about how I can help you figure out the best way to get your home sold in today’s market. Until then, take care!

Honesty from the listing company Reliability from the listing company Hassle free initial MLS listing and fast MLS changes Live phone support for Realtors®, non-represented buyers' and sellers' needs Buyer-lead capture system Listing software that allows the seller to change/edit their MLS listing without calling the listing broker Email verification to track and confirm MLS change requests made by seller. International and domestic Internet marketing is implemented. Homes.com, and Realtor.com will host your listing. Major real estate website portal ads and exposure will include: Google Base, Trulia.com and PropSmart.com No conflicts of interest with buyer leads (they belong to the seller) Real estate signs that do not advertise the name of the flat fee company*